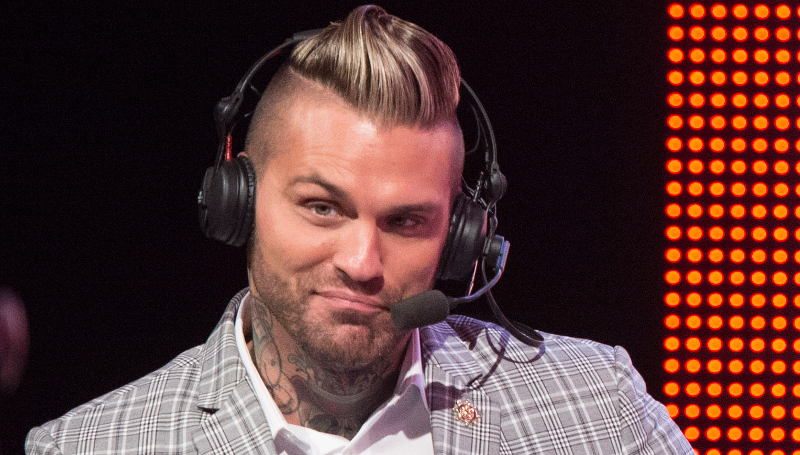 Corey Graves addressed the ‘elephant in the room’ after WWE’s Saudi Arabia trip and says there’s a bunch of conspiracy theories, but it’s not the truth of what he experienced first-hand.

Graves kicked this week’s episode of After The Bell off by talking about the various reports and rumors about why WWE talent was delayed in leaving Saudi Arabia after Crown Jewel last week. He said he can only speak from first-hand experience and he’s heard and read the same things fans have, but he overall had a good experience on the trip. Graves said the travel over to Saudi Arabia was fun and easy, and while he had his own reservations the first time he went over there as well, the people have been welcoming and the event surpassed expectations. The only negative he said he personally experienced was that his body didn’t adjust to the time difference, but called it an awesome experience otherwise.

“Back to the aforementioned elephant in the room, the ‘travel snafu’ as we’re calling it internally. It was weird, it was definitely unusual. We got to the airport immediately after the Crown Jewel event, there were a litany of delays and no one seemed to be able to get a sure-fire answer as to what was causing the delays. We heard everything from the fuel truck was parked on the runway and the guy that drove the fuel truck wasn’t there,” Graves said, “there was literally ten or fifteen different reasons why we couldn’t get on the plane. Everyone was exhausted, we just wanted to get on the plane and get some sleep and get ready to head back to the United States for Buffalo for SmackDown.

As has been well-publicized, there have been quite a few theories as to what happened—long story short, and again, I’m speaking from personal experience, this is all I know, what I know—we got on the plane, we were in our seats, we were ready to take off,” Graves said, “they took our food orders for the flight, there was some confusion regarding the pilots. I was seated on the upper deck right outside of the cockpit, the pilots were going back and forth, there was some sort of mechanical issue. I am not an airline pilot, I can barely wind my own watch, so I don’t exactly know the ins and outs of what happened…we sat on the plane for a while, they shut the plane down, they restarted it to see if whatever they had attempted to fix had worked. It hadn’t worked. In the time it took to get all of this done, the flight crew had timed out and we were all informed that we would not be taking off. So they deplaned everybody, and at some point some people from management came around and said ‘hey, if we can get a group of you guys to SmackDown, would you be willing to do it?’”

Graves said this is where it just came down to being a professional, noting that ‘the Saudi Twenty’ as they were dubbed on social media were just the people that were advertised for SmackDown. “It had nothing to do with who was most important or who had the most cache. There are a lot more important people than myself and Michael Cole and ‘Sweaty the Camera Guy‘ who made it onto that smaller charter.” Graves said. “But the fact is it was decided who was essential to make Friday Night SmackDown as close to whole as possible and the efforts were made. Obviously it didn’t work out, but that was the effort.”

Graves went on to say that what really got to him was the rumor mill, including the one about Vince McMahon ‘leaving talent’ in Saudia Arabia and leaving on his own. Graves pointed out that it might make a good headline, but Vince leaves as soon as the show is over every week, whether he goes home or to the next city, because he’s busy running a company. He added that the other names people heard about making it back to the States early—Hulk Hogan, Ric Flair, Brock Lesnar, to name a few—have earned certain perks in their careers like a private jet. He also pointed out that some of the rumors that were seen on social media were ultimately started by some of the roster themselves, and explained why it did more harm than good.

“Understandably this led to some talent, led to some of the crew going ‘Oh my god we’re stuck here, this sucks’ — and it did. Nobody wants to be stuck in an FBO airport that doesn’t even have a bar or a restaurant or anything like that for hours on end. Nobody wants to be sitting on a plane on the tarmac for hours on end. It sucks. There is no two ways about it, but all these conspiracy theories that have been drawn up—and half of it comes from the boys that were on the plane.” Graves said. “If you are that insecure and you feel so strongly that you’re gonna get on Twitter and complain because our flight got screwed up for whatever the reason would be—what’s Twitter gonna do? All it is, is fuel for these journalists and then it gets on the internet and everyone starts putting their two cents in and everyone comes up with their conspiracy theories. If you’re mad because your flight got delayed and you weren’t one of the ‘Saudi Twenty’, you weren’t ‘important enough’ to get on the jet, that’s on you. Quit crying about it on Twitter. You’re a WWE Superstar, this happens as part of our live. We have travel woes, we all have travel issues.”

Graves went on to say Randy Orton, who would have the ‘cache’ (and a reputation) for speaking his mind, didn’t complain about the issues at all. Graves says it was about doing the show and delivering what was promised, and although it didn’t work out, the show went on and it ended up being pretty great anyway. He closed the segment by saying can’t do anything to silence the conspiracy theorists and says the speculation might be fun, but it’s not the truth.

A number of WWE Superstars voiced their displeasure with the experience online, but AJ Styles was one of the WWE stars that was delayed and took to his Mixer channel to shoot down some of the more ridiculous stories told over the weekend. Styles said they were told there was an issue with the fuel truck and the crew being timed out, but noted he was really only upset about missing his son’s wrestling match and that he didn’t want throw anyone under the bus because they were still learning what happened.

It was also reported that WWE held a talent meeting earlier this week to address the travel issues with talent, where Dave Meltzer of F4WOnline.com alleged that Seth Rollins gave a “rah-rah speech” during the meeting. While it’s been confirmed the meeting did take place, Rollins shot down the Meltzer report and said he didn’t even speak at the meeting. Rollins has since issued a statement to Fightful, noting he said ‘zero words’ during the meeting.

Check out the full episode titled ‘Silence Your Twitter Fingers’ below:

Related: AJ Styles Tells His Side Of The Saudi Arabia Flight Situation