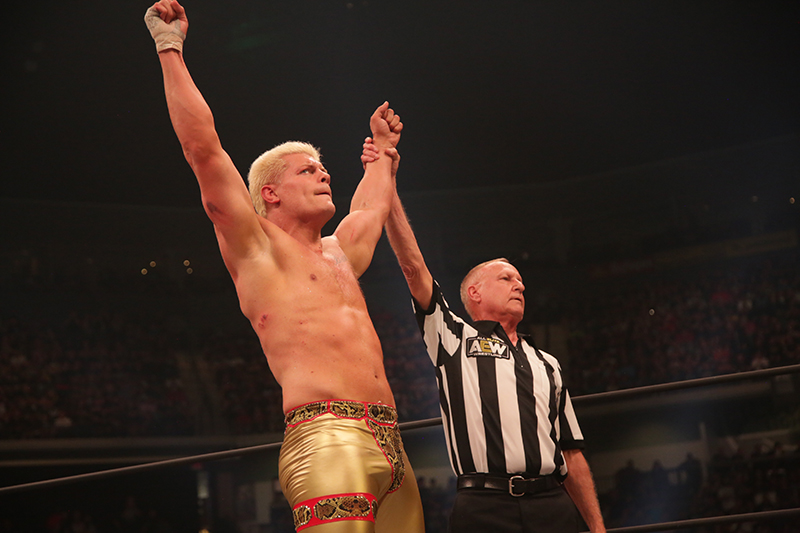 Cody Rhodes opened up the first episode of All Elite Wrestling Dynamite by taking on Sammy Guevara. The winner would take on Chris Jericho at AEW Full Gear, a condition that Rhodes already had earned coming into the bout.

. @CodyRhodes making his way to the ring to kick-off #AEWDynamite on @TNTDrama pic.twitter.com/SHNBLgO6Zc

The crowd was electric for the introductions and made this feel like a big-time affair. Rhodes got an advantage early on and tried to wear down the younger fighter, but Guevara knew this was the biggest match of his career so far and wasn’t willing to go down without a fight. He battled back and used his quickness to his advantage. He even used underhanded tactics by pulling Brandi Rhodes in front of a dive.

Ultimately, the power and veteran savvy of Rhodes wound up being too much for the upstart. After a few scares, including an awesome Spanish fly by Guevara, Rhodes was able to get his knees up after a shooting star press attempt and then lock up a cradle for the pinfall.

After the match, Guevara and Rhodes looked to shake hands, but Chris Jericho ran in and started attacking his next challenger.

. @IAmJericho brutally attacking Cody post-match before they meet at #AEWFullGear. Are you watching #AEWDynamite? pic.twitter.com/LcXGOkvoOa