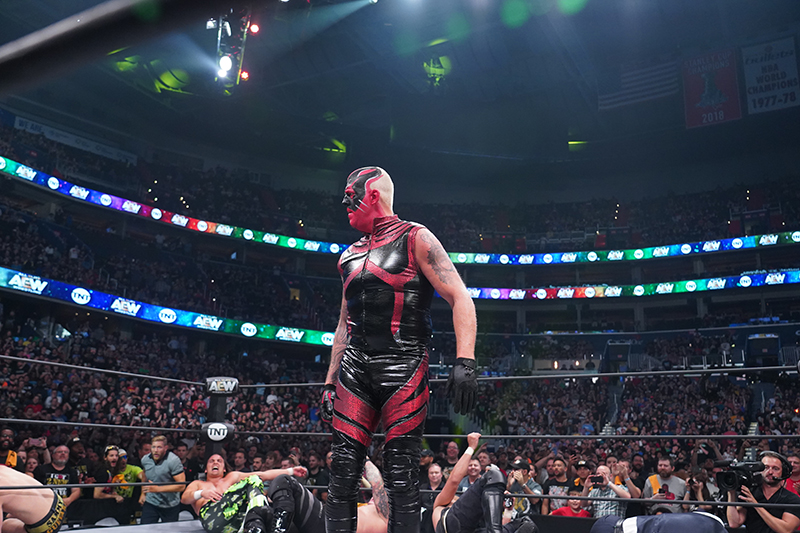 The main event of the second episode of AEW Dynamite saw All Elite Wrestling Champion Chris Jericho & Sammy Guevara take on the team of Dustin Rhodes and Adam “Hangman” Page.

Moving smoothly like they've been tagging for years! @theAdamPage & @DustinRhodes are still in the fight pic.twitter.com/yVxelIENHP

Rhodes wasted no time going after Jericho as he stormed the outside and started landing punches until Sammy Guevara got the action back into the ring. Rhodes and “Hangman” wound up being a natural team as the duo easily out-powered Guevara. They almost had a pinfall but Jericho was able to break it up at the last second.

Once Jericho was tagged in things started to go better for the champion. Jericho started to overpower Page, and began dismissively slapping the man he beat for the belt. Guevara was then tagged in and Page was able to change the tides by hitting a huge discus lariat. He then tagged in Rhodes, who was able to dominate the much younger opponent. The 50-year-old showed his agility with a huge crossbody.

Jake Hager, who was ringside, then took out Page, which left Rhodes alone against two opponents. While the ref was distracted, Hager then attacked Rhodes and Jericho hit the Judas Effect for the win. After the match, the Inner Circle continued to beat down everyone in the ring.

The lights then went dark and Cody Rhodes came out to confront Jericho, however Ortiz and Santana were able to beat him down. MJF then came down to help him out, and then started beating down Jericho and the former LAX members with a chair. The Young Bucks came down to brawl with LAX and the babyfaces stood tall to end the show as Jericho fled with the belt. However, before Jericho could get out of dodge, Darby Allin rolled in on his skateboard and attacked the champion.

Overbooked? Certainly, but it was fun.

Who won the night? Was it All Elite Wrestling Dynamite on TNT or WWE NXT on USA Network? Did Chris Jericho’s new faction reveal deliver? What did you think of Walter taking on Kushida and the big title switch on NXT? Join the conversation with WZ Daily’s Kevin Kellam getting your comments on screen right after both shows go off the air.
RELATED: AEW Dynamite Results – 10/09/19