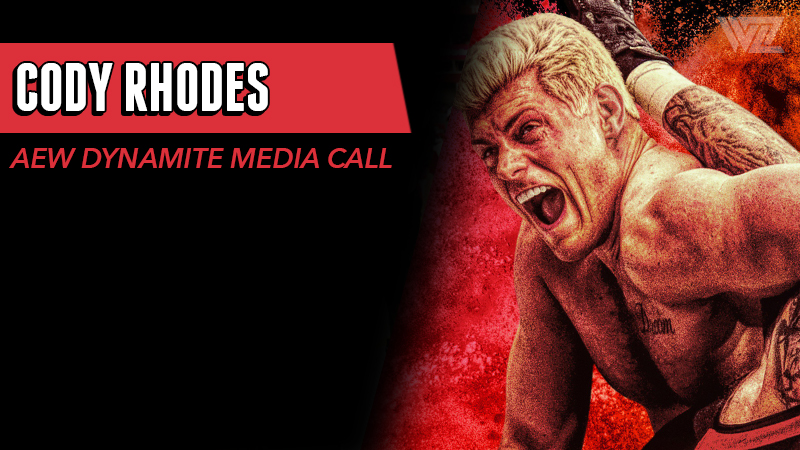 Cody Rhodes took part in a media call on Tuesday afternoon to promote the AEW Dynamite premiere on TNT, highlights (bolded text denotes media question) and audio from the call are below:

Cody says he’ll never knock NXT, and he has a lot of friends still with the brand. He knows how important the brand was to his father, and thinks Kenny was just poking fun and was staying in gimmick.

Cody on working with younger talent, following through on storylines

Cody says they’ll use the same techniques as seen on their web shows (Road To…) as a way to showcase younger talent. He said there’s more to see between himself and Darby Allin based on their match this summer. He says they know have 52 weeks a year to showcase new talent. In regards to his match on Dynamite, Cody says he’s not going to Full Gear to face Chris Jericho if he loses to Sammy Guevara.

Cody on using the ‘Rhodes’ name

Cody says he can use it, but he won’t because he’s gotten used to just going by Cody in recent years. Says he liked the sound of ‘American Nightmare Cody’ and he’s already gotten a big enough rub from the Rhodes name over the years. WWE isn’t keeping him from using the name.

Cody on the size of the AEW roster

Cody says there’s a great deal of talent on the roster that we haven’t seen yet. He says his math might have been off (based on a recent tweet he made), but there’s plenty of people that have been saved for Dynamite. They’ve been kept off of PPVs and live specials for a reason.

Cody has a viewership number in mind, but doesn’t want to divulge that just yet. He says the live audience will help gauge what the ratings are and Turner has large expectations, hoping to bring in the fans that left wrestling after WCW went under.

Cody on diversity on the AEW roster, size of the roster

Cody says the roster is a work in progress, but he wants to hear from fans and media about unsigned talent that they should be watching. He’s also asked about the perception of other stars (WWE) wanting to come over to AEW if they aren’t happy with their situation, and he says the current roster is at 85%, and talent can’t just call and ask for a roster spot if they have a bad run where they’re at.

Cody says they are planning for PPVs to be quarterly events, maybe extending that to 4-5 per year. He notes the cost of putting on a show like that and jokes that we can’t see him on the call, but he’s winking when he says the fourth PPV of 2019 will be on the west coast. Cody is asked about the German TV market, and he says he hopes no one is left out in watching Dynamite.

Cody jokes about potentially buying the ‘War Games’ concept back from WWE. Says he wants to come up with an original concept, notes the Casino Battle Royale. Says he’s got the Bunkhouse Stampede and Battle Bowl on reserve. Cody says he wants to create things as compelling as his Dad’s ideas, but not borrow from them completely. He says Nick Jackson created the Casino format, and they perfected it with the women’s match at All Out.

Will AEW be paying attention to NXT?

Cody says no, they’ll focus on their own show, but they’ll see what happens when they check on Thursday. He says NXT can watch them, noting NXT moving to USA on Wednesdays was a reactionary move.

Cody is asked about working with Cain Velasquez. Cody says he’s keeping an eye on him. Seems like it comes natural to him, and he’d love to work together again. He’d be a great fit with the AEW family. Praises Psycho Clown as well.

Cody says some angles will go down specifically on Dynamite, some will be for the social media platform. Cody cites the MJF vs. Brandon Cutler angle about Dungeons and Dragons being a successful way to draw non-fans in.

Cody on the corporate side of wrestling

Cody says nothing has surprised him since he saw what Dusty did with his role at Turner. He has years of experience in growing up around it, but also surrounded himself with good-minded people for business like Chris Harrington to help on that side of things where he’s lacking.

Cody on wins and losses mattering

Cody says they will very much matter, but they’ll also have ‘heat charts’ and measure it like college sports do with strength of schedule.