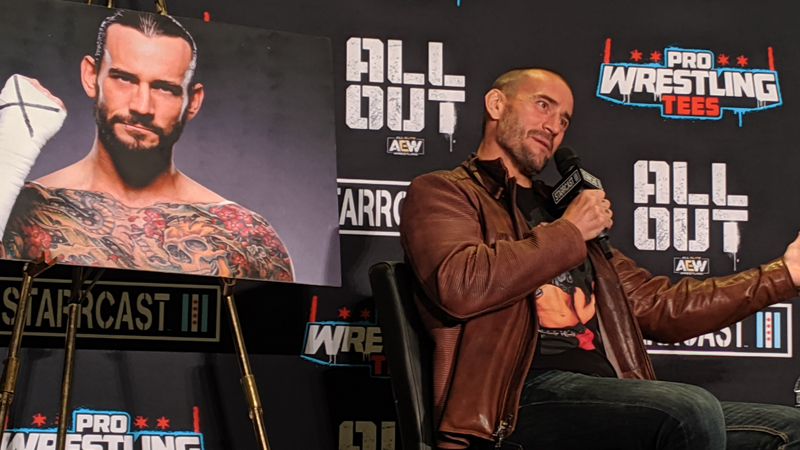 As promised, CM Punk was on WWE Backstage tonight.

Punk addressed what brought him back on WWE television first. “I don’t think this job existed even six months ago, let alone six years ago,” said Punk. “This got offered to me and if you never ask, the answer is always no. Someone floated the idea … and something inside of me [decided to do it].” He went on to state that wrestling and what he’s doing as a broadcaster is very different as he hasn’t talked to anyone from WWE and this is strictly him with FOX. “I think that’s a very interesting dynamic. I get to criticize the product and that’s something I’ve always done.”

"It's been so long since anything related has made me feel anything." – @CMPunk on his shocking return last week on #WWEBackstage pic.twitter.com/mIV2Wrb9Ce

Punk said that he’s not gonna be fired or jobbed out, so he can tell it like it is. Punk then discussed last week’s surprise by saying that he hated when WWE would “work the boys,” but he got to do that with the WWE Backstage crew. He said it was stressful and made him nervous, which in turn made him feel like he’s doing the right thing as he rarely feels butterflies anymore. He revealed that his inner circle is “very small” now and that a lot of people he thought were friends were just work acquaintances. Only 10-12 people knew he would appear. “I’m at a point in my life where I can pick and choose what I do and I don’t have to work with jerks.”

Renee Young then asked if he would ever come back into the ring again. “Regardless of what my answer is, somebody is always gonna be upset with it,” said Punk. He said he isn’t actively pursuing it, but he’s 41 and knows not to say no. “That’s gonna be a bridge that is gonna have to be built and it might take as long as building the Great Wall of China. There are a lot of hurdles.”

"It's not something I'm actively pursuing." – @CMPunk on a possible return to in-ring action. #WWEBackstage pic.twitter.com/sg398s7uSI

Punk says the product is much like when he left it. “It could be so much more,” said the ex-WWE star. “Stuff is overproduced, micromanaged, and the best characters … are the characters that they get to figure out stuff themselves than told by someone else. There’s a lot wrong with it, but there’s a lot of bright spots too.” What he likes about the current product is NXT and how great women’s wrestling is (although he hates the forced #WomensRevolution campaign).

RELATED: Tony Khan Responds To CM Punk’s ‘No One Is Safe’ Dig, Goes Back & Forth With Randy Orton