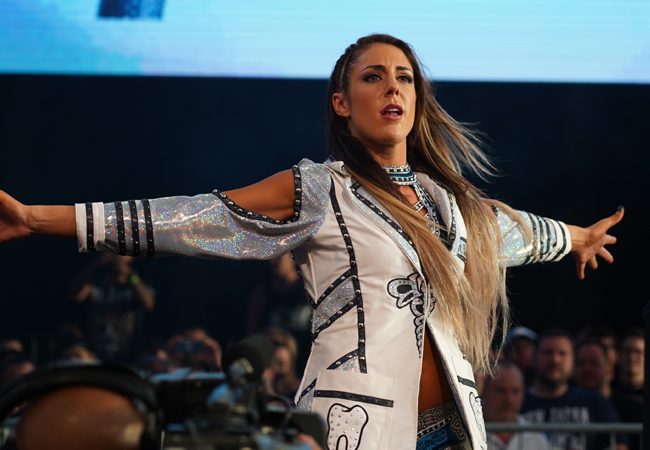 Before Britt Baker has her bout against Bea Priestley at the Full Gear Buy-In, the Dentist of AEW took part in an interview with TK Trinidad of Women’s Wrestling Weekly. Baker shared her thoughts about going up a newfound rival in Bea after she left her concussed back at Fight For The Fallen in July. Britt shared her concern after receiving the concussion and feels that Priestley could give a damn about her or anyone’s well being. Quote and video are below:

“This is going to be a battle. So it’s no secret, Bea gave me a concussion at our first time we ever stepped in the ring together. Bea’s first step in an AEW ring was “Get in, Step, Step, Kick, Concussion” to me. So, um, You’re trying to keep it as fan-friendly as possible right now, but there’s definitely a little bad blood there and I just kind of, you know, put it all out there with the promo that we released last night and I really feel everything that I said in that. I was severely concussed to the point where I couldn’t go to work for a week, I lost all peripheral vision on my left eye and there was, had to go see retinal specialists, neuro-ophthalmologists and I mean like… I had to go see specialists I didn’t know existed and I’m in the medical world. So you know, That was hard, that was like a physical and mental challenge, a little hill for me to overcome, and that’s always in the back of your mind, well what if it happens again? What if it happens again? Granted I know we’re putting our bodies at risk every time we step into the ring but I just think it was very like, “She didn’t give a damn. To.. For lack of better words. And I don’t think she cares about really anybody and anybody’s wellbeing but herself.. So there’s a way of being, you know, competitive and there’s others that are just reckless. With that being said, I’m definitely watching my back this weekend and she better watch hers too.”