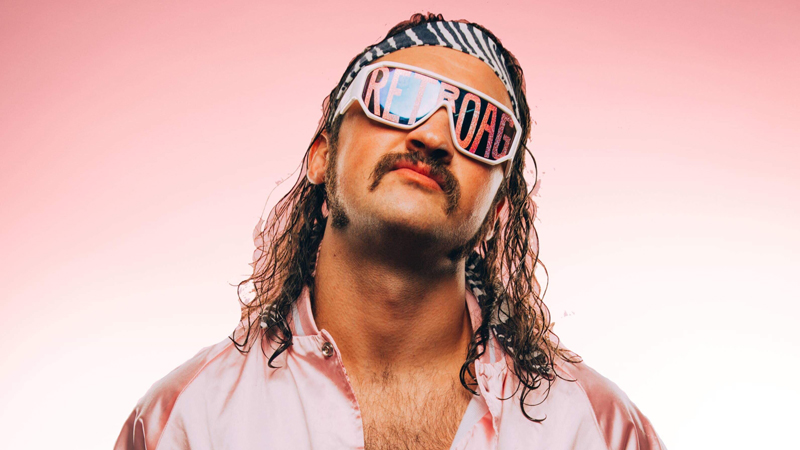 “Retrosexual” Anthony Greene took some time out of his busy schedule to spin the dial of his phone and speak with Kevin Kellam ahead of his Halloween Bash themed event under the Zero 1 USA Northeast banner. Retro AG talks about the development of his persona and how it ultimately came from shooting the breeze in a group text with other wrestlers, and NXT’s Dominik Dijakovic gave him an idea.

“Basically I fell asleep in 1987 and woke up in 2019 is the best way to explain it, and the way that it came about I was wrestling as this generic Anthony Greene for a while, this unexplained wrestler in tights, and I knew that I needed something. I was getting opportunities at a lot of good places, but like there would never be any follow-ups after the fact. So I was in a group chat with a couple of the wrestlers, throwing out ideas,” Greene said, “and one of the wrestlers—Dominik Dijakovic—said that you’re not as jacked as Brian Cage and you’re not as athletic as an AR Fox, but you do have a lot of charisma and character. What can you do to make yourself an elite wrestler like those two, but with character?”

“Out of nowhere, just spur of the moment, I threw ‘retrosexual’ out there and he said, ‘Huh, I like it. Explain what he is,’ and I just explained how the character would think,” Greene said. “It was just really easy for me to come up with ideas for the character so just slowly just unraveled and it turned into what I am today.”

Greene has raised enough eyebrows in EVOLVE and on the independent wrestling scene that it was he and Josh Briggs that Gabe Sapolsky deemed worthy to be the first-ever independent wrestling match to air on the WWE Network. Greene talked about having a case of the all-day butterflies before that match.

“The scariest thing ever, honestly. Cause the first thing is not only was it on the WWE Network, but it was the 10th Anniversary of EVOLVE with Dragon Gate so that’s insane in itself, and then add the fact that it’s in Philadelphia at the ECW Arena. So you throw all that together and the entire day I couldn’t eat,” Greene said, “I was just so nervous and I was looking up at the banners of all the Hall Of Famers of the arena and you look at the names like Eddie Guerrero and Chris Candido, Eddie Gilbert, 2 Cold Scorpio—these are guys that basically made a little crappy bingo hall in Philadelphia a historic wrestling arena.

“At that point, I wrestled there a few times, but I never felt like I kind of didn’t belong until like I realized all these guys that worked so hard to make a name for themselves in that building and make that building mean something. It was just super nerve-racking and then the fact that we were thrown on first, to be the first-ever independent wrestling match on the WWE Network, one is I guess a huge compliment from the EVOLVE management and Gabe Sapolsky that he had that much faith in myself and Josh Briggs. It was definitely a very big, I guess very important thing to carry on my back.”

Kellam asked Greene what the dynamic is in such a buzzworthy locker room like EVOLVE is now that it’s positioned as one of the premier independent promotions going. Greene said it’s an exciting and competitive environment, but in the best way possible. “There are the veterans of the locker room like Eddie Kingston and AR Fox are two really good examples,” Greene said, “and they’re there to kind of push us younger guys like myself, Curt Stallion and Leon Ruff to the next level.”