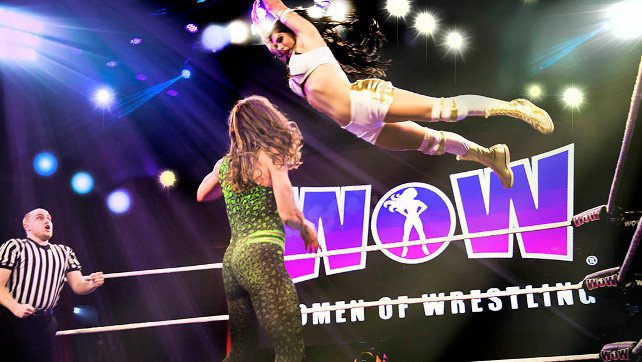 Speaking with Afterbuzz TV’s Women’s Wrestling Weekly, Amber O’Neal talked about her past as a wrestler and her future with Women Of Wrestling.

Why She Started Wrestling

The reason why I started wrestling was because I, um, was a huge Sable fan. I literally did not know a lot about wrestling, um, I just saw her and was like, “Oh, that looks like it would be a cool job. I want to me a women’s wrestler.” But then, I started watching it and I became obsessed with Lita and Trish Stratus, the real athletes of the industry. But I would have to say, until they came along, there was um, a dip, almost like degrading, for women’s wrestling, and I personally feel like that the way that women were being portrayed during that time, like Sable’s role …and Miss “Kat” Kitty, so their roles in wrestling were like degrading, they weren’t being portrayed as athletes.

How She Broke The Mold

I did start wrestling in a lot of inter-gender matches, which I love, that was literally one of my favorite times… cause to interact with the guys and then the guys would be like, “Oh, you know, these girls can really go.” And I think Lita, and the Hardy Boys and Trish… they were doing a lot of six-man tags back then and I just think it was really up to us to stand our, stick to your guns and say, “No”, we didn’t want to be a part of these types of matches. And we would lose bookings like we were canceled off shows sometimes. It was just a matter of sticking to your guns… we didn’t want to be a part of that.

Thoughts on Women of Wrestling

I am so proud of David and what he has made happen. I’m so proud that Jeanie Buss has decided to you know give us this platform and I think it has come a long way since the original like 2000, even though I’m very grateful for that, because I was a huge fan and that was, you know, these girls, they had these larger than life characters and it was very different. And I just feel like I’ve been with David on this journey, I’ve been working with him since 2011 and the first time he ever told me his vision, I was like, I have this similar vision, and I understand what he’s trying to do and I’ve been completely supportive and I’ve stood by his side and it’s been amazing cause there were definitely times that we didn’t think anything was going to happen. 2011, 2012 every year sometimes twice a year we were filming a pilot and then it was getting repackaged. He never gave up and he is a prime example who had a vision and never let anyone like steer him differently from his vision.

Favorite Match Of All Time

The most memorable I would have to say is debuting the first-ever women’s wrestling match in New Japan with Maria Kanellis. We were the two first females to lock up in New Japan and that was a really amazing moment.

What She Wants To Be Remembered For

I would like to be remembered for someone, a woman in this business who just always was represented in a positive light. I’m definitely proud of making that history in Japan and I’m so proud of being part of the first women’s wrestling show, you know, during this era… and I’m very proud of being an NWA Women’s World Champion, so you know I think I’ve accomplished most of what I’ve set out to do so as long as I can be remembered you know in that light and knowing, that, and be remembered for loving this business and giving in my heart every single match and weekday in and day out.

You can see the full interview in the video embedded below: